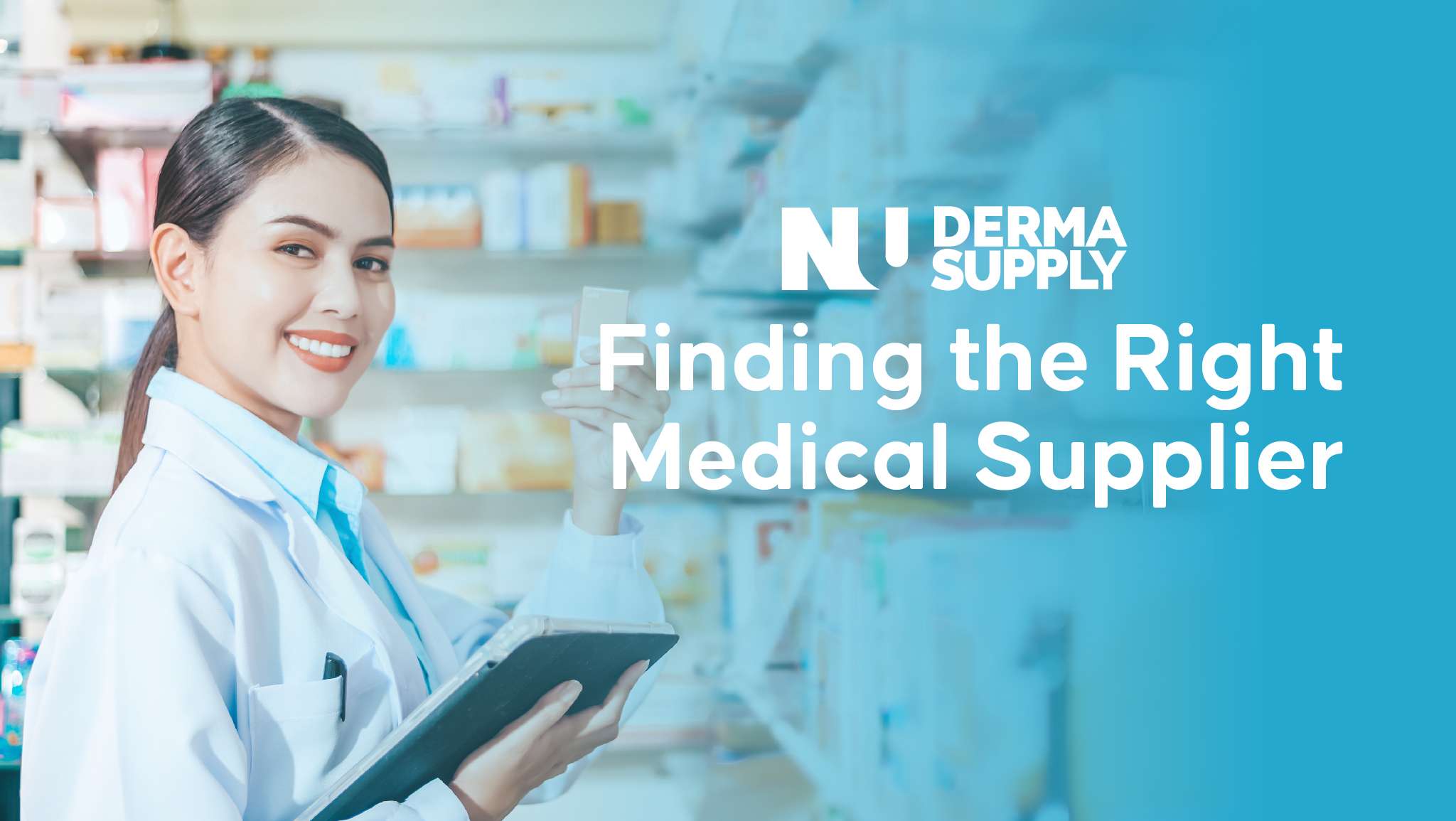 Having your own medical practice can be a daunting task. Between being a medical practitioner and a business owner, so many things have to be managed to make your business successful. One of the things to keep track of is making sure you have the tools and supplies you need to actually provide your services. Having a supplier that you can trust and who can deliver what you need is a must! But how do you find good medical supplies and what should you look out for? Read on to find out.

What does your business need?

The first thing to ask is what does your business need? What products, how much, how often, etc. These questions will also be asked by prospective suppliers so knowing these things beforehand will go a long way to improving your negotiations with them.

How do I find good suppliers?

Now that you know what you want, it’s time to take a look at some of your options.

These are just the tip of the iceberg when looking for the right supplier. It’s important to take your time and weigh your options carefully. Don’t lose sight of the big picture as these decisions can impact your business over long periods of time and can make or break your business.

If you’re looking for medical suppliers, look no further than Nuderma! We provide genuine and high-quality medical products such as dermal fillers, orthopedic injectables, and other medical supplies. We source our products from top brands at competitive rates and our customer service teams are ready to assist you in your orders from beginning to end. Visit our site now at nudermasupply.com! 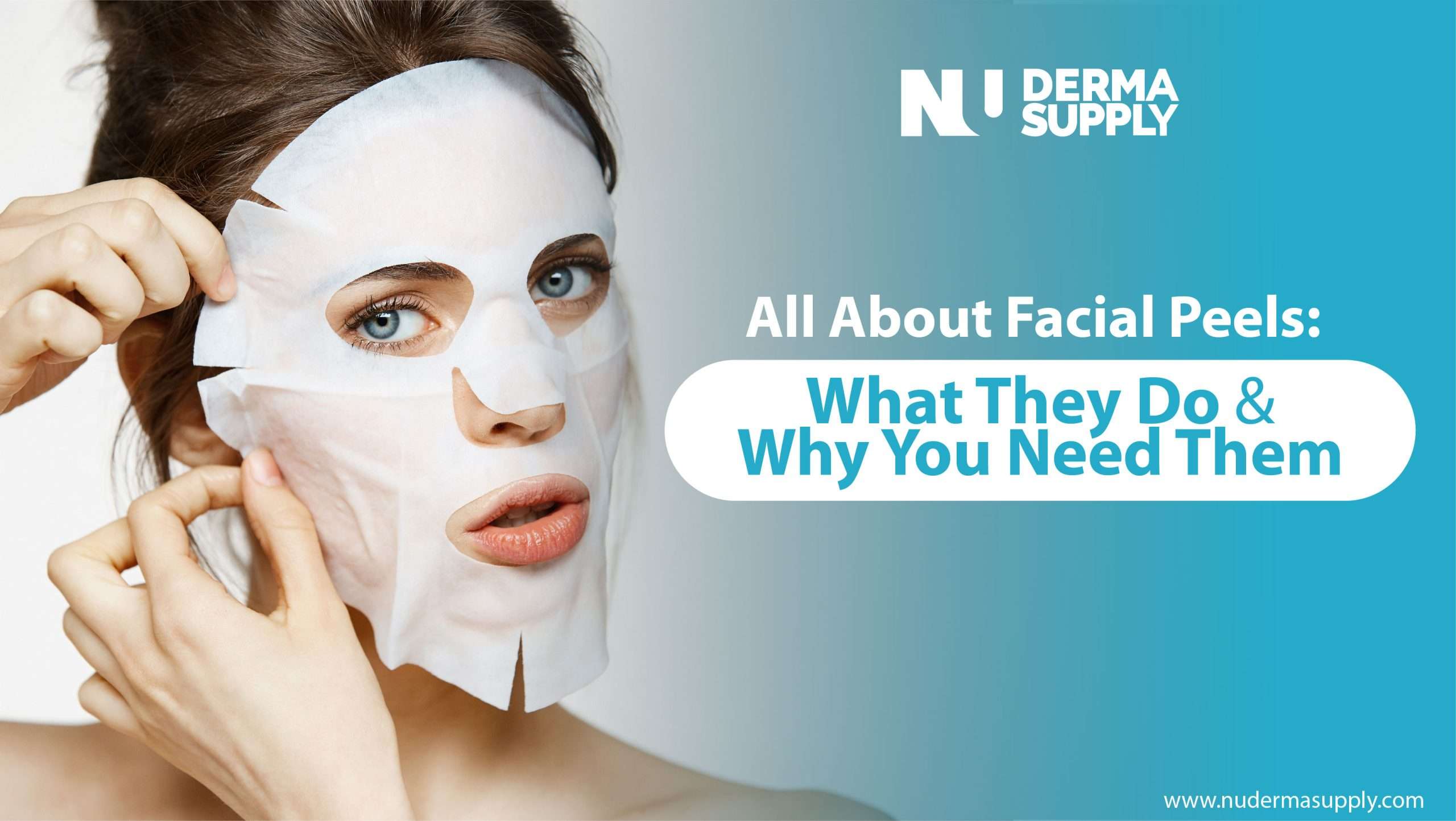 Do you want to get rid of wrinkles but aren’t sure you’re ready to commit to a dermal filler procedure? Maybe you’re apprehensive about needles or the clinical setting and want to fight off the signs of aging from the comfort of your own home? Or maybe you wish you could just go to sleep and wake up feeling and looking refreshed?

Then you should consider trying out some chemical peels. There are multiple types of chemical peels that you can use by yourself in your own home without needing to go to a clinic. These different types of peels can give different advantages:

How do peels work?

Different peels have different ingredients that will have different effects. In general, most peels have a chemical solution that causes the upper layer of skin to blister or peel off, taking away most superficial blemishes and allowing new cells to grow in its place.

Others have a hydrating or soothing effect that draws moisture into the skin, clearing away wrinkles and making the skin look smoother and healthier.

Other peels may even be more specialized like salicylic acid peels which are great for acne.

How do I know which peels are the best?

It is always a good idea to consult a licensed dermatologist for advice on what to use, but to give an idea on the function of each peel, here’s a breakdown of some of the peels in our online site:

Whatever your needs, make sure to check out our online store at Nuderma.com! 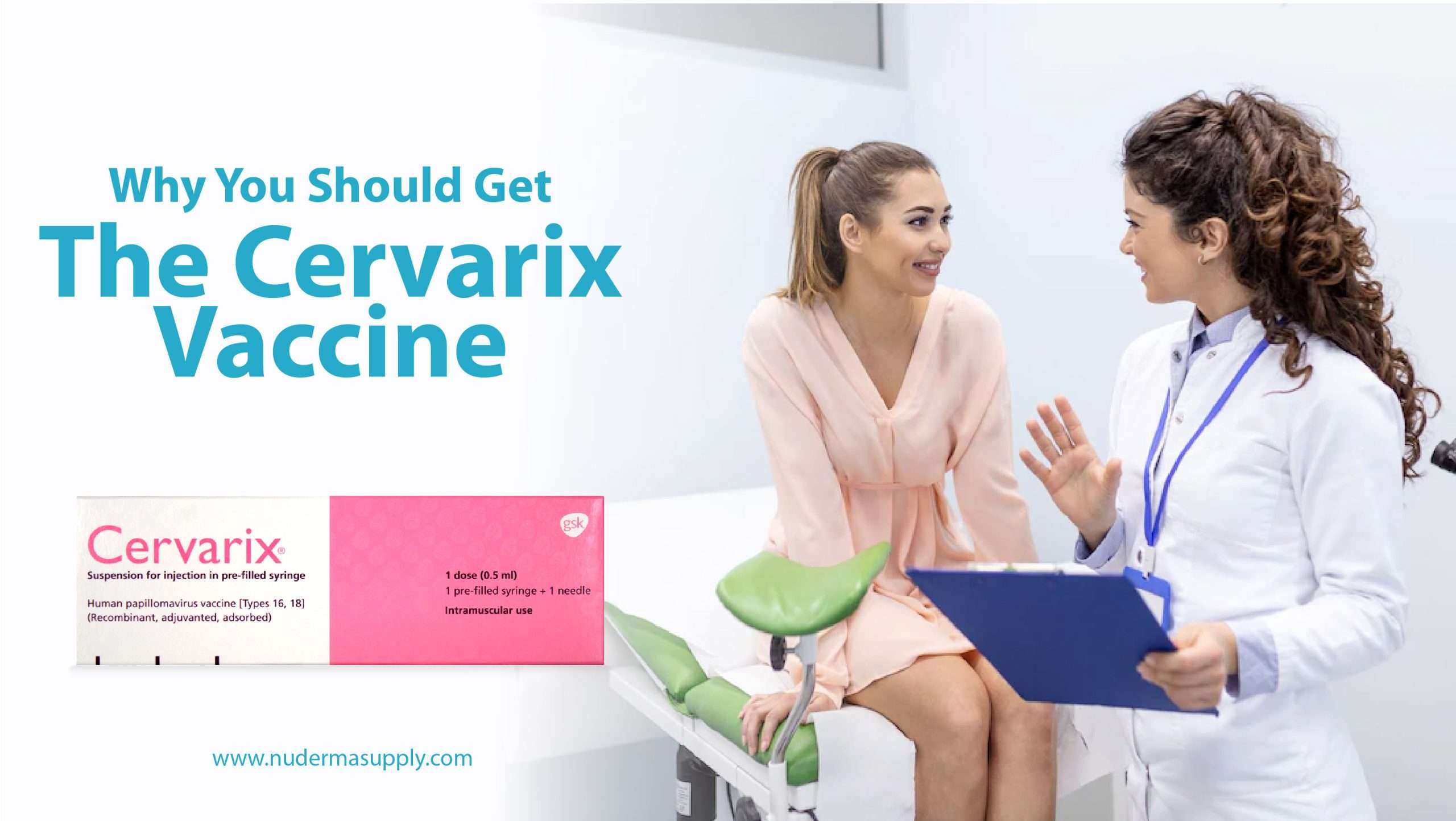 Much of the reduction in cervical cancer deaths has been attributed to the widespread availability of testing for it. Early detection leads to earlier treatment, leading to fewer casualties.

Cervarix is a vaccine against cervical cancer produced by GlaxoSmithKline Biologicals that was released in 2011. It is a recombinant Human Papillomavirus Bivalent (Types 16 and 18) Vaccine approved for use in patients between 9 to 25 years of age. It is not meant to prevent all types of cervical cancer, but the proteins being used in the vaccine are responsible for 75% of cervical cancer cases.

Cervarix is supplied in a suspension available in 0.5ml single-dose prefilled syringes. It should be administered by a healthcare practitioner intramuscularly and the full two or three doses should be completed before a patient can be considered vaccinated.

How does Cervarix work?

Cervarix works by targeting the outer shell or capsid of the human papillomavirus. This shell is made up of L1 proteins. Cervarix contains purified L1 proteins of HPV type 16 and 18 created through a process called recombinant DNA technology. These proteins are introduced into the body through benign virus-like particles so that they will be recognized by the body, triggering an immune response

Once this immune response is triggered, the body is then able to create antibodies specifically to find and eliminate L1 proteins. So if the patient who underwent the vaccine gets exposed to HPV, the antibodies will then attack the L1 proteins in the HPV shell, causing the virus to be eliminated.

How many doses of Cervarix is needed?

Are there any side effects to Cervarix?

The most common side effects from getting the Cervarix vaccine are:

So what are you waiting for? Protect yourself and purchase Cervarix online at Nuderma.com 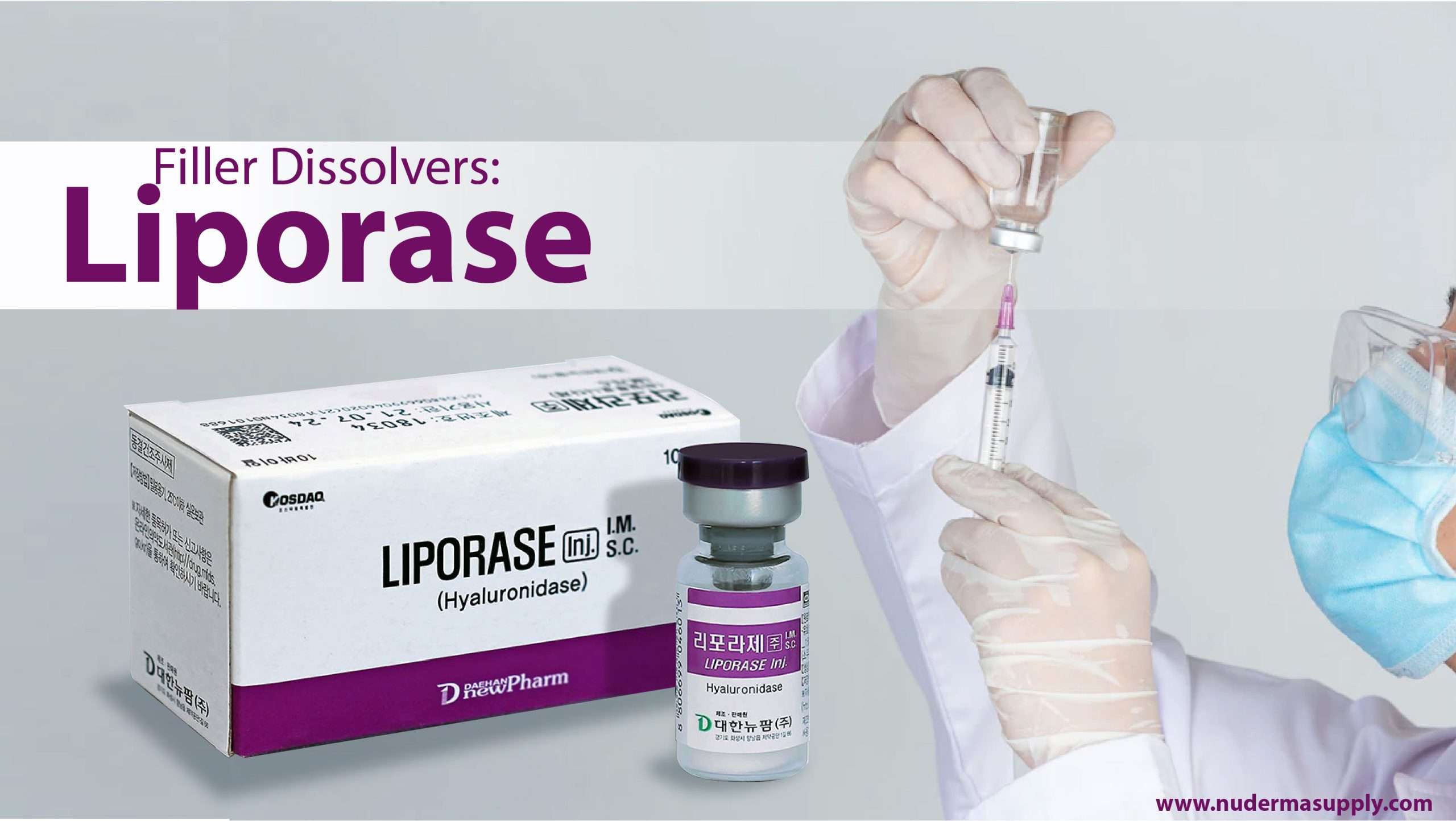 One of the advantages hyaluronic acid fillers have over other substances that could be used as fillers is how easy it is to correct or remove if the need arises. If a reaction or complication arises such as blood vessel occlusion or wrong placement; or even if the client just changes his or her mind and wants the filler removed, hyaluronic acid can easily be dissolved using filler dissolvers.

The main filler dissolver currently in the market is hyaluronidase. It is an enzyme that specifically breaks down hyaluronic acid. It was generally used for increasing the absorption of other drugs such as anesthesia, but since the increase in demand for hyaluronic acid fillers, it has also gained a lot of use in dissolving those fillers when needed.

Hyaluronidase is approved for use by the US Food and Drug Administration for the purposes of subcutaneous fluid infusion, as an adjuvant to accelerate the absorption and dispersion of drugs in subcutaneous tissue or to manage extravasation, and as an adjunct to promote the absorption of contrast media in urinary tract angiography. It has also been approved and used for the purpose of increasing hematoma absorption in Europe. Even though these are the current approved uses with the US FDA. It is also commonly used in dissolving hyaluronic acid fillers, treating granulomatous foreign body reactions, and avoiding skin necrosis associated with filler injections by dissolving the fillers.

Liporase is a hyaluronidase product created by the South Korean company, Daehan New Pharm. It is mainly used in dissolving unwanted hyaluronic acid fillers. Since it only targets synthetic hyaluronic acid, it won’t affect the body’s own hyaluronic acid. It usually works fast in dissolving the fillers and effects can be seen within 24-48 hours depending on the filler placement, and amount of crosslinks.

Liporase comes in a powder form and the correct dosage has to be calculated based on the following factors:

The recommended dose of Liporase is 1 vial of hyaluronidase mixed with 3cc of saline to dissolve 3cc of hyaluronic acid.

What are the side effects of Liporase?

Common side effects of hyaluronidase include:

If any of these symptoms persist or if they become unbearable, you may contact your doctor. Some rare side effects to hyaluronidase can include:

If you get any of these side effects, contact your doctor immediately. 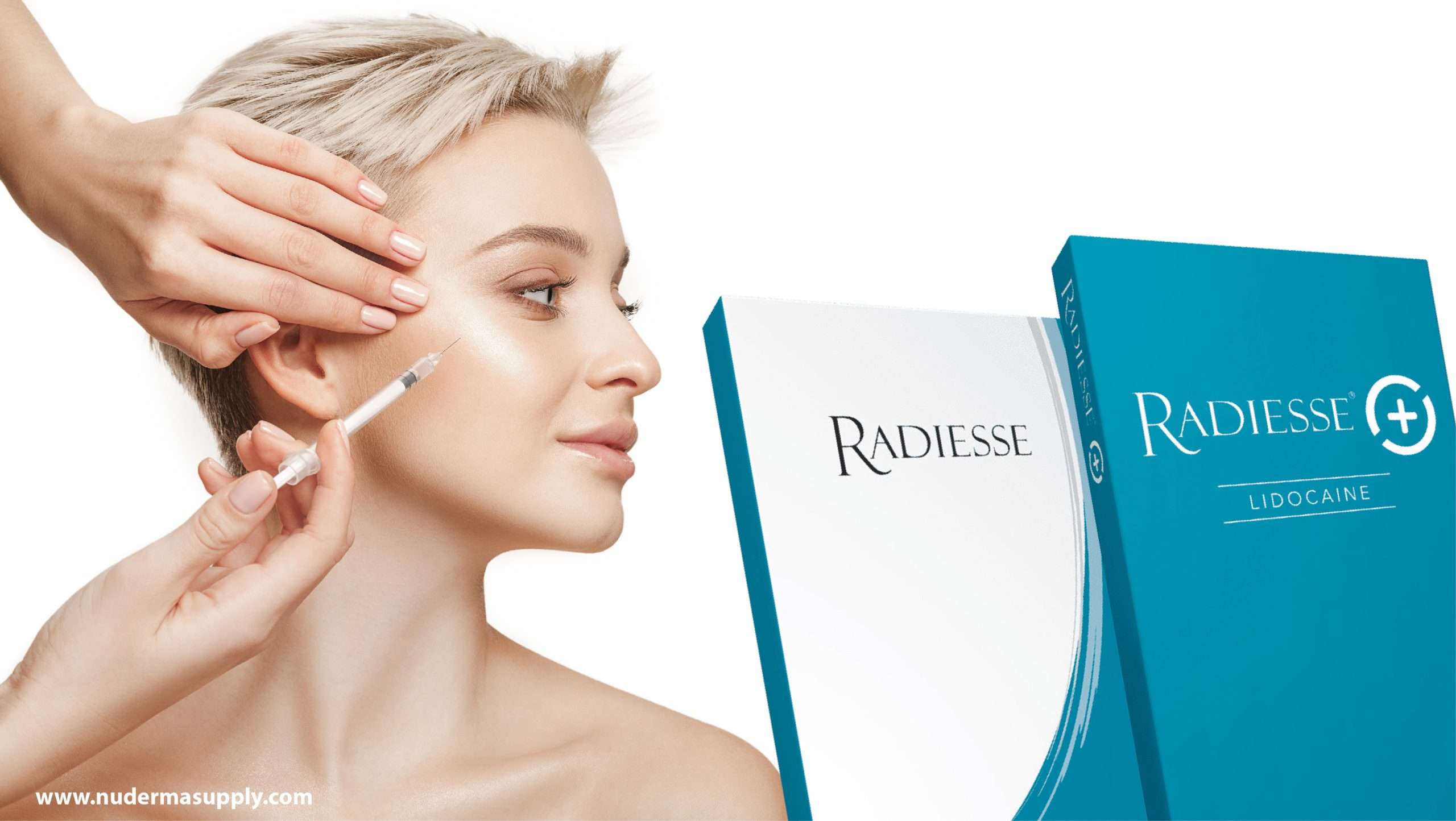 Radiesse is a synthetic filler made from calcium hydroxylapatite microspheres instead of hyaluronic acid. It has the same restorative and volume-adding capacity as hyaluronic acid, but has some key differences and advantages as well.

Radiesse’s calcium hydroxylapatite microspheres can be used to treat most of the same areas as hyaluronic acid-based dermal fillers, including moderate to severe wrinkles and lines in the face and volume loss in the face and hands. However, due to its consistency, it is not advisable for use in the lips.

These calcium-based microspheres fill in the spaces in the skin similar to other dermal fillers, adding volume and creating a support structure in the skin. However, it also has the added effect of stimulating collagen growth in the area. Over time, while the calcium hydroxylapatite breaks down, it leaves a lattice of collagen in the area, maintaining the volumizing effect in the area.

Radiesse has a more viscous consistency and is well suited for moderate to severe wrinkles and fold and for adding volume to sunken areas. It can also be used for eyebrow lifts, cheek augmentation and other procedures that need a firmer dermal filler. The downside to its firm structure is it is more difficult to mold or correct once it is injected.

Calcium hydroxylapatite also has the advantage of lasting longer in the body than hyaluronic acid. That and since it leaves behind collagen, the effects of Radiesse stay for longer, meaning you will need fewer treatments to maintain it.

Since calcium is also naturally part of the body, Radiesse has a good tolerability with minimal risk for reactions or side effects. If there are any side effects, they should disappear within 5 to 10 days from the procedure without any intervention. Radiesse products also have an option for added lidocaine to further reduce any discomfort from the procedure. A cold compress may be used on the injection area to reduce any pain or swelling.

Radiesse is not approved for use on patient who are experiencing the following:

Though side effects are uncommon, most of these are from the injection procedure itself and should dissipate within a few days.

These are more severe complications that are rare, but should be reported to your physician if any of them occur.

Administration of these products should take less than an hour with no need for significant recovery time. You should avoid strenuous activities like exercise as well as the use of makeup for the first 24 hours.

You should be able to see the effects of these products immediately after the procedure and these can last up to 2 years.

Information on this site is provided for informational purposes only. The use of some of the products included on this website should always be supervised and in any case and prescribed by a physician. It is not meant to substitute for the advice provided by your own physician or other medical professional. If you have or suspect that you have a medical problem, promptly contact your health care provider. The products must be used according to the information provided by manufacturers printed in brochures and on the packaging of the products. You should carefully read all product packaging, and contact the manufacturer with any questions before using a product.

All products found on this site are 100% authentic. The brands are trademarked and owned by their original manufacturers. Please note that this website is not affiliated with these manufacturers. Product packaging may not look exactly as seen here.

Please note that due to the current pandemic deliveries are subject to delay. Dismiss